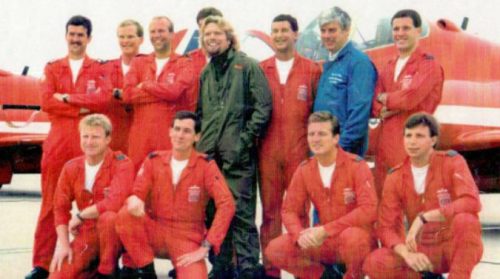 “I am truly delighted to be part of the Luxury Cruise & More family. Your decision to appoint me as your global ambassador is very much appreciated and important to me as I like to be involved with forward thinking people. I am looking forward to our future challenges, opportunities, and successes together.”

Fred Finn also holds the record for the greatest number of flights as a passenger on Concorde, having made 718 crossings, even making the flight across the Atlantic three times in a single day. “I first flew on Concorde on 26 May 1976 on her first flight from Washington to London and I was on the last flight from New York to London on 24 October 2003. I had a 27-year love affair with Concorde, it was the most amazing, beautiful aircraft in the world — ever. It was a piece of art in the sky.” Fred always sat in seat 9A, as he quickly realised it was “where they started to serve the food and drink.”

Fred also helped Sir Richard Branson start-up Virgin Atlantic and has flown extensively with that airline. Fred said “I had lunch with Richard on his houseboat for three and a half hours and he asked me to work on his new airline, Virgin Atlantic. I suggested Upper Class, said they should get a limousine to put passengers on the plane and take them home and give them a first-class rail ticket. I told him to put a masseuse on board too”

Fred Finn has visited 139 countries, many of them more than once, and has a particular fondness for Kenya, which he has visited 600 times, and for the country of Georgia.
Fred will be hosting special cruises and private events exclusively for clients and guests of Luxury Cruise & More.

Since March 2017, Mr. Fred Finn is also a Brand Ambassador of the Travelindex Group.

Investour Returns to Highlight Power of Investments for Tourism Africa

UNWTO and ITC Collaborate to Strengthen Coastal Tourism in Liberia