The Croatian name Solin is derived from the Latin name Salon, which has its root in the Illyrian language. This name is mentioned in history for the first time in 119 BC, when the Illyrian and Roman wars were taking place. The beginning of this settlement is certainly much earlier. Ancient Greek geographer Strabon says that Salona was the port of the Illyrian tribe of Dalmatians, who probably traded with the Greek sailors. The remains of the ramparts, and objects of Greek origin found in and around Salona, point to the Greeks as the founders of this city.

Some claim city was actually founded in IV century BC. It is obvious that the Greek influence was very early present in Salona, so it is rightful to say, that in the first period of Salona it was a Greek-Illyrian settlement. In the first century BC Salona was occupied by the Romans. In the civil war between Caesar and Pompey, the people of Salona supported Caesar; since he won, the city has been promoted to honor the colony, so it is officially called “Colonia Martia Julia Salona”. The city expands east and west and acquired two new parts: in addition to the older Greco-Illyrian part, the newer Roman to the west and east. That is why the writers from that time mention the plural form for the name of the city – Salonae.

When Illyricum was governed as a Roman province, Salona became a true cultural, commercial, political, and for some time military center. In later centuries it was also the ecclesiastical center. Also in the first centuries after Christ, many easterners, including the heralds of the gospel, immigrated, who in the second half of III. century organized in Salona the Christian municipality. Three was many christian martyrs during the time of Diocletian.

The fact that Diocletian was born in or around Salona, and built a famed palace nearby, raised the reputation of this already important center.Evidence of this is the vast harbor and the numerous roads that connected it with other parts of the empire. The last three centuries of the ancient Salona have been characterized by the development of a strong Christian community in the city and its impact on the entire province. The Bishop of Salona became the metropolitan of the entire province of Dalmatia.It is also an era of gradual invasions by barbarian tribes,such as the Eastern Goths,who reached this area at the end of the 5th century.

While the Western Roman Empire fell under their attack, Salona, located relatively far from the main routes of their invasion, lived for another 130 years and at one point became a haven for some of the last Western Roman emperors. The city was destroyed by Avars and Slavs around 614 AD. The surviving population, who managed to escape, took refuge in the nearby islands and in Diocletian’s Palace. This is where the life of the new city, today’s Split, began.

To this day, ancient Solin has remained in ruins, only a part of ruins has been well explored and investigated, but this part which was explored, reveals enough of its size and significance. If we look at the floor plan of the city, we can see that its shape is rather irregular, and it looks like as an ellipse. The longest axis reaches about 1600 meters and the widest about 700 meters. The area surrounding the ramparts is 72 hectares. In the second century AD, During the Macromanic dangers, the newer part of the city, like the first core, was surrounded by walls and fortified towers. Since then, its walls reach about 4 kilometers and the number of towers reaches 90. In VI.century during the Byzantine-Gothic wars, some towers were reinforced, with triangular endings still visible today. 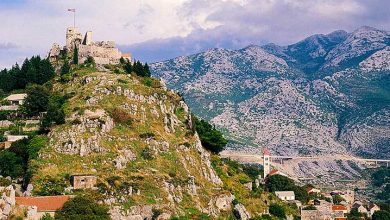