In the eastern suburb of Salona five arches spanned the western-most backwater of the Jadro river (the ancient Salon river). The bridge carried one extension of Decumanus Maximus which branched into two roads, one of which led north-east to the Porta Andetria gate, while the other one led across the bridge to Epetium, today’s city of Stobreč.

The road that led from the oldest part of Salona, through the Porta Caesarea eastward, about one hundred metres after leaving the town, crossed a backwater. The road was laid on stone arches, known in the local terminology as the Five Bridges. This locality was excavated at several different times, like many other locations in Salona: before the First World War (1910-1914) as well as during the war when among the workers in Salona there were Russians who were taken as prisoners of war, were working as well.

Nearby, large areas of Roman mosaics have been found, one showing Orpheus, and another the sea-good Triton (2nd-3rd ct.). Today, they are kept in the Archaeological Museum of Split. Given the several layers of mosaics of superb quality, it is deemed that here there was a public building, perhaps the palace of the Dalmatian governor, the floors of which were decorated by these mosaics. 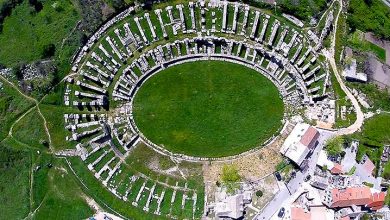