In the town of Solin (Croatia), Hotel President***** Solin, from 13 to 15 November 2019, with a wealth of initiatives and various cultural events taking place in the town of Solin, once the ancient Salona, near Diocletian’s city of Split , and this year, for the tenth time in a row, three international tourist film festival, landscape events will be held:

WITH THE PRESENTATION OF THE WINNERS OF INTERNATIONAL TOURIST, FILM FESTIVAL, LANDSCAPE AWARDS

All three events, are members and partners of world associations; travel, tourism film, tourism journalism, landscape, ecology and sustainable development; FIJET, FEST, ITCO, CiB. With the support of these world-wide associations, and the main host Hotela President Solin, all three events are held under the patronage of the Split-Dalmatia County, the City of Solin, and the High Patronage of the Croatian Parliament and the President of the Republic of Croatia, Mrs. Kolinda Grabar-Kitarovic.

The event begins on Wednesday, November 13th. At 6 pm with a commemorative program, at 7 pm, with a flag-raising ceremony, followed by a retrospective view of the best films awarded at past tourist film festivals – ITF’CRO. On Thursday, November 14 from 10am; continuation of the working part of all three events, protocol and working presentation of Exhibitors / Laureates – winners of international tourist awards and recognitions; KEA-CRO, CHARGES FEST & GOLDEN INTERSTAS ‘2019. Closing ceremony of the entire event will be held on Friday, November 15 from 7pm, with an award giving; Certificate to Croatian competitors for the INTERNATIONAL GOLD FLOWER – CiB, special awards “Dr.Lucija Cikeš”, international tourist awards: POVELJE FEST ‘2019. and GOLDEN INTERSTAS ‘2019. and film festival awards, diplomas and Grand Prix 22nd ITF’CRO 2019. By program

26. INTERSTAS 2019, is the place of meeting and presentation of Laureates – distinguished individuals and organizations from Croatia and the world, winners of prestigious international tourist, individual and collective awards. Awards are given to them; “For their excellence in and for tourism, contribution to the development of tourism through culture, ecology, sport …, and contribution to the improvement of quality of life, sustainable development, environmental protection.” Last year 2018, with the explanation of the Committee of tourist Journalists and Writers, 141 applications were received from 29 countries. The justifications for the 78th individual and collective candidates were accepted and 57 nominated. By the decision of the Central Committee F.E.S.T. and the Manifestation Directory, the 35. Laureate was selected. Of which: Certificate 1. individual award 21. and 13. collective awards.

The 22nd ITF’CRO 2019 / International Tourism Film Festival, as a member of ITCO,it has become a respectable festival in this domain of international action. Every year, it attracts a growing number of production companies from all over the world who, with their authors, apply for tourist, travel, documentary, cultural, environmental films. In the past 2018, a respectable number of 307 films have arrived from as many as 83 countries from all over the world. Out of the total number of films submitted, the Festival Selector in the official nomination for one of the international festival awards, the national Baldo Cupic Award and the Grand Prix of the 21st ITF’CRO 2018, included 107 films from the 62 countries ,95 films from the world and 12 films from Croatia. The International Jury awarded: 12 Special Awards, 8th Authors’ Diploma to Filmmakers / Producers, as well as the National Baldo Cupic Award and Grand Prix.

17. KEA-CRO 2019 / presents Croatian cities / towns / centers competing for the CROATIAN INTERNATIONAL LANDSCAPE AWARD for INTERNATIONAL GOLDEN FLOWER AWARD – INTERNATIONAL GOLD FLOWER. Under the slogan “PEOPLE, PLANTS AND PRIDE … GROW TOGETHER”, and a special award “Dr. Lucija Cikeš”. When competing to beautify their environment, urban or rural, they are looking for solutions for the best environmental challenges and improving the quality of life. And not only in the landscape, horticulture, gardening, but also in the culture of life, tourism, environmental awareness and much more. Developing and expanding the education and awareness of more people about the value, improvement, importance and sustainable development of green spaces and the natural environment in every society are the fundamental goals of this project. In the context of climate change and environmental concerns, all communities involved in the project can be proud of their efforts to come up with concrete environmental solutions that contribute to the well-being of society as a whole. Last 2018, the 13th application was received from Croatia for the KEA-CiB Certificate and the special award “Dr Lucija Cikeš” .9 applications have been received from the world for the special award “Dr Lucija Cikeš “. For the KEA-CiB 2019 Certificate from Croatia, 5 cities were nominated from abroad , for “Dr. Lucija Cikeš ”were nominated 3 Centers from abroad.

All three international events, this already traditional internationally recognized multimedia project, with a notable reputation in the world, is a unique manifestation of its kind in Croatia. Designed to actively contribute to stimulating the international integration processes of contemporary tourism, over the past years it has gained a reputation for being a very dynamic and important meeting. It is held at a very convenient time, beginning with active preparations for the next tourist business year. In the realization of the before mentioned events, linking the world tourist, film-festival, cultural, landscape associations, integrating culture, tourism, tourist film, ecology, is to strengthen the positions of these three events. It also actively contributes to the development of environmental awareness, sustainable development, ecology, quality of life. An increasing number of accredited participants are extremely pleased every year, among them, with distinguished individuals and organizations – Laureates, authors and producers of tourist films, are domestic and foreign tourist journalists.

Through 3 working days (Wednesday, Thursday and Friday), with exhibitions, presentation of Laureate-winner of international tourist awards, screenings of tourist films, presentation of this exhibition, are organized; international symposium, “round table”, film, tourist, environmental education workshops, special promotions, professional excursions and exploring the historical, cultural and other landmarks in the area. It is an opportunity to meet and make numerous contacts, business talks, exchange of international experience and knowledge, with people who make important decisions in the field of international tourism, environmental protection, sustainable development, manufacturing and production of tourist films… With journalists who accompany these events, world renown media promoter – Travelindex,this manifestation is an immeasurable contribution to the promotion of tourism in Solin / Split, Split-Dalmatia County, and the tourism branding of Croatia in the world. This project also contributes significantly to the overall development of cultural tourism in the world.

With the fact that we are recognized by departmental world and European landscapes, film festival and tourist journalism associations; FEST, FIJET, ITCO, CiB, It is estimated that by promoting the international integration processes of contemporary tourism, this manifestation jointly contributes to the development of tourism, tourist film, environmental protection, better quality of life, and overall international tourism exchange, thereby satisfying the supply of high-demand tourism in all aspects through connecting the entities that participate in it.They significantly contribute to the recognition of the tourism product of all local, regional, national participants who take part in it, and thus to a better understanding among peoples and countries, which is the main objective of this event.

With a welcome to all participants of the event in the Town of Solin / Croatia also this 2019 year, in advance, our sincere congratulations to this year’s Laureates, and with that to joining the International Club responsible for tourism development.

The manifestation council and the FEST Main Board, based on the nominations from three different categories, and the motivation of the Committee of Travel Journalists and Writers, and the International Jury of the Festival of Tourist Film, for each individual, organization, film, decide on the Laureates, and at the closing ceremony of the event awards them these prestigious international awards: KEA’CRO & Dr. LUCIJA CIKEŠ, CHARTER FEST-ANTONIO CONTE, GOLDEN INTERSTAS – BEST FOR EXELLENCE IN TOURISM AWARD, AND ITF’CRO – awards for the best tourist promotional film.

Nominations for each of the Laureates selected and the tourist promotional film are explained:with excellence, high quality work, but also recognition of their creativity and individual contribution, which, through their professional, professional, scientific and practical work activities in their own projects and development programs, tourist offer and presentation, promote the tourist and cultural offer and thus contribute to the integrity of promotion and development of tourism, and culture of life, at local, regional or national level. It certainly contributes to prosperity, quality, betterment of life and better understanding between people and nations. In doing so, it confirms the justification of giving these awards, and thus the entry into the International Club responsible for tourism development.

Only Laureates – winners of GOLDEN INTERSTAS, and KEA’CRO, are selected in accordance with the collective award rules, are presented within the exhibition program of the International Tourism, Film, Landscape – INTERSTAS event.

This distinguished international recognition, the Charter for Excellence and Outstanding Contribution to Tourism – “PREMIO EUROPEO – BENEMERERITI DEL TURISMO”, founded 37 years ago by Antonia Conte in Rome, Italy,it is awarded to distinguished individuals, world-renowned names from the domain of various professions; who, through their personality, excellence in public service in science, the arts, and professionals and professionals in tourism, gastronomy, enology, sustainable development, culture, film, music, sports … have contributed to the top achievements in promoting tourism at different levels.

The award ceremony of this highly prestigious international award, from its founding from 1982 to 2003, took place in several European countries, in different cities. From Rome, Milan, Montecatini, Varese, Florence, Lecce, Todi, Krakow, Warsaw, Prague, Vienna, Lyon, Budapest, Bucharest, and others.

By decision of the FEST and FISCALIS headquarters, it has been awarded in Croatia since 2003.

The license transfer agreement and the giving of this award solely within the framework of the International Tourism, Tourism Film, Landscape – INTERSTAS-owned FISCALIS concluded; CEO Vojko PLESTINA, owner of Fiscalis, founder of the International Tourism, Tourism Film, Landscape – INTERSTAS, ITF’CRO and KEA-CRO, and Honorary President of this event Antonijo CONTEO, founder of ITF, FEST, ITCO, Split, October 15 2003 as part of the 10th INTERSTAS and 6th ITF’CRO. The Agreement on Assignment of License, Transfer of Ownership and Award of 2003 was announced to the public and the media on the occasion of the ceremony on the first award ceremony in Split. 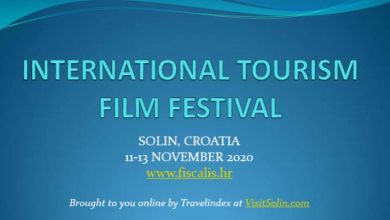 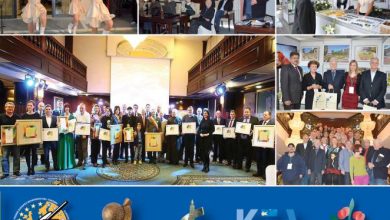