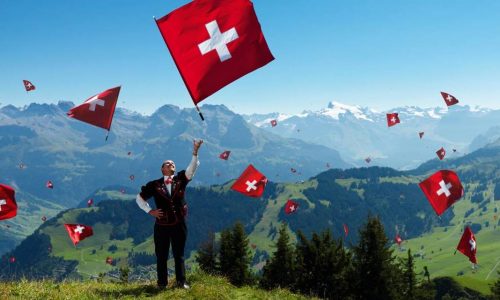 Grütli, Seelisberg, Uri, Switzerland. August 1, 2020 / TRAVELINDEX / Founding of the Swiss Confederation in 1291 Since 1891, the first of August has been celebrated as Swiss National Day. The date refers to a historic alliance concluded in 1291 by the three cantons of Uri, Schwyz and Unterwalden. This alliance was to become the focal point around which the Switzerland of today was built over the next 500 years.

Men from these three cantons “at the beginning of the month of August 1291” swore eternal allegiance to one another, promising mutual help and assistance. The alliance was mainly formed against the Habsburgs, who were striving to strengthen their position in the strategic region leading to the Gotthard Pass at the time.

August 1st is celebrated exclusively within the communities; a radio or television broadcast by the President of the Swiss Confederation is the only exception to this esteemed federal principle. Communal celebrations comprise solemn words spoken by a prominent public figure from political or cultural life, accompanied by a concert or choire, gymnastic presentations, and the community singing the national anthem.

Wealthy communities or tourist offices may also sponsor a display of fireworks. Bonfires, mainly on hills and other elevated spots, commemorate the expulsion of foreign bailiffs in the fourteenth century, the news of which were spread in this manner in those days. Children carrying lighted paper lanterns roam the streets at night. Public and private buildings are decorated with national, cantonal, and community flags, and the bakers produce special bread rolls with a small Swiss flag on top.

A special kind of celebration takes place at the Rhine Falls near Schaffhausen. From mid-nineteenth century onwards, the waterfall has been illuminated on special occasions. Since 1920, it has been illuminated regularly on August 1, and since 1966 exclusively so. On the same day, a magnificent fireworks display also attracts throngs of spectators to this special site.

A representative celebration is staged at the Rütli Meadow in the canton of Uri above Lake Lucerne. It takes place in the same place where the legendary pledge of alliance was pronounced.