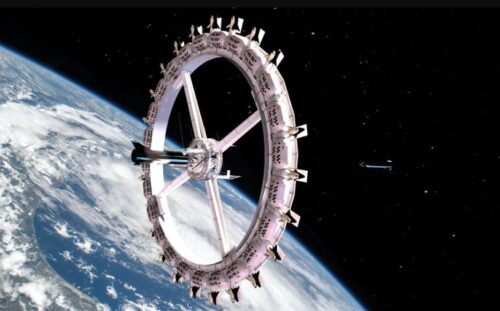 Fontana, California, United States, May 3, 2022 / TRAVELINDEX / Orbital Assembly Corporation is a leader in the race to make space available to everyone by building the Voyager-class of Space Stations, a gravity simulating on-orbit habitation environments for leisure, commercial and industrial activities.

Orbital Assembly is aiming to launch not one but two space stations with tourist accommodation: Voyager Station, the renamed original design, is now scheduled to accommodate 400 people and to open in 2027, while new concept Pioneer Station, housing 28 people, could be operational in just three years.

After blasting off from Earth, guests will arrive at a central, zero-gravity docking hub. From there, elevator shafts will carry them outward to a chain of “habitation modules” arranged around the circumference of the circular station. It’s only there, at the edge of the wheel, that the centrifugal force will be strong enough to keep guests and their surroundings firmly grounded.

Humanity’s 70 years of advancing space development has been hindered because astronauts on orbit begin feeling the detrimental effects of microgravity within 48 hours. Until now, long term sustained habitation on orbit has not been possible. Orbital Assembly provides for the critical need of artificial gravity by providing critical infrastructure solutions enabling construction, maintenance, research, commerce, and other operations on-orbit for long periods of time without the detrimental health effects of microgravity.

Orbital Assembly flagship project is the Voyager-class Space Station. The large rotating stations are designed to produce varying levels of artificial gravity by increasing or decreasing the rate of rotation. Artificial, or simulated, gravity is essential to long term habitation in space. The station has been designed accommodate commercial and manufacturing partners as well as national space agencies conducting low gravity research.

The Voyager Class will also provide the comfort of low gravity within the luxurious accommodations of a luxury hotel space for tourists who want to experience an extended visit to space.

The concept of the rotating wheel, proposed in the early 1900s as a way to generate artificial gravity, was later popularized in the 1950s by the German rocket scientist Wernher von Braun (Voyager was originally named in his honor). Thanks to the centrifugal force it produces, visitors will be able to move about normally, more or less.

The billionaires Jeff Bezos and Richard Branson have paid to cross or arrive at the edge of the Kármán line, the boundary between our atmosphere and outer space. Beside a budding clientele of Bezos and Branson stature, the era of full-fledged pleasure trips to space seems at hand, even for a multi-day escape.

About Orbital Assembly Corporation
Orbital Assembly Corporation (OAC) is the only company advancing the development and operation of the first commercially viable space-based business park with gravity that will enable humanity to work, play and thrive in the space ecosystem. Commercialization of these space parks will include manufacturing of integrated circuits, photonics, fiber optics, satellite rework, military applications, biomaterials, organ growth and pharmaceuticals. The company will also provide communications hubs and opportunities for space tourism.