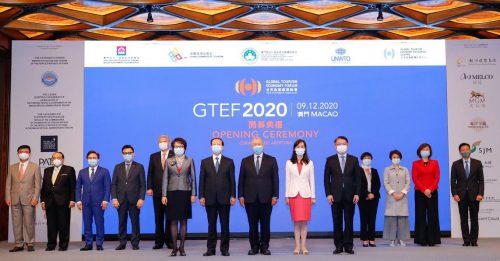 Macao, Macao SAR, December 10, 2020 / TRAVELINDEX / The Global Tourism Economy Forum Macao 2020 (“GTEF” or “the Forum”) was unveiled at MGM Macau. Under the new normal of pandemic control and prevention, the Forum leveraged innovative technology to convene in a hybrid online and offline format with a replay in Europe and America time slot to break through geographical and time zone barriers, expanding coverage and enhancing participation among target audience for optimal results. The Forum gathered tourism leaders from the public and private sectors as well as experts and scholars form worldwide to explore “Solidarity and Innovation: Reshaping Tourism in the New Global Economy” in depth. GTEF’s opening ceremony was attended by around 160 guests at the main venue in Macao and over 70 guests at the parallel venue in Hubei respectively. The opening ceremony also engaged 300,000 online spectators from 51 countries and regions.

Vice Chairman of the National Committee of the Chinese People’s Political Consultative Conference and Forum Chairman of GTEF, Ho Hau Wah, stated in his welcome remarks, “Although the pandemic has temporarily distanced us physically, I do believe that the hearts of all in the global tourism sector have gathered here today in Macao; we all hold the same determination and desire to work collaboratively in efforts to provide solutions for the recovery of the global tourism economy. Held in Macao, the Global Tourism Economy Forum is an advanced international exchange and cooperation platform dedicated to fostering the sustainable development of the global tourism economy. Let’s start anew at this historical point to build an open, inclusive and balanced world for the welfare and success of all peoples, and join hands to create a brighter future shared by the global community!”

On behalf of Chief Executive of the Macao SAR, Secretary for Social Affairs and Culture Ao Ieong U stated in her welcome remarks, “2020 is such an unusual year filled with unprecedented challenges. Confronted by the new prospect and challenges, we need now more than ever to unite in restoring confidence in travel. Under the theme of ‘Solidarity and Innovation: Reshaping Tourism in the New Global Economy’, this Forum brings together prominent leaders of the public and private sectors as well as experts and professionals from across the world to proffer their foresights, letting brilliant minds converge to offer a new impetus, unveil new thinking, chart a new course and create new opportunities for our march towards global tourism recovery. The Forum is also set to inject a new dynamic and vitality for Macao’s tourism and economic development.”

UNWTO Secretary-General Zurab Pololikashvili stated, “The UN World Tourism Organization is proud to have been a part of the Global Tourism Economy Forum from the start. This year we have a chance to demonstrate the incredible solidarity within tourism. It is also a chance to show how innovation is driving the restart of our sector.”

At the opening ceremony, Secretary for Economy and Finance of the Macao SAR Government and Executive Chairman of GTEF, Lei Wai Nong, delivered a special keynote on “Macao’s Success Story: Public Private Partnerships for Tourism Economic Revival” and expressed that Macao has endured the enormously challenging period of pandemic control and prevention this year. In view of the situation, the Macao SAR Government has promptly rolled out a series of bolstering measures and formulated different schemes to spur tourism and economic revival. Throughout the process, the Government was showered with the ardent support of different sectors in the society and united all residents in Macao to weather the storm. Despite the enormous difficulties on the way, the local economy is gradually manifesting a steady and upward trend. We will continue to embrace the policy direction of “reinforcing foundation and rising to challenges”, to carry on the successful story of Macao.”

At the Forum themed as “Solidarity and Innovation: Reshaping Tourism in the New Global Economy” this year, around 50 Mainland, local and international government and industry leaders as well as international tourism organization and enterprise leaders proffered their foresight and visions on how to foster tourism economic recovery as well as sustainable tourism development. The Forum aspired for industry collaboration across the world as well as close public-private partnerships to rise above adversities with resilience and deliver positivity across the globe, restoring travelers’ confidence and a thriving business environment for the global tourism industry.

Diverse and inspiring sessions
Held within one day, the Forum presented an enriched program of innovative and inspiring highlights including special keynotes, special sessions, industry leadership interview series, special dialogue and report presentation, among other sessions. The sessions include PATA & GTEF Partnership Session: Best Practices under the “New Normal” through Consumer Sentiment Analysis. In the session of “Global Leadership Special Feature: Hospitality, Aviation, Technology, and the Way Forward for Tourism”, different guest speakers presented their insights into the topics as follows: “Forecasts for Tourism Trends in a Post-Pandemic World”, “Paving Way towards a More Resilient Sector through the Rebuilding of Consumer Confidence & Safety”, “Air Travel in the ‘New Normal’: Boosting International Coordination and Harmonization of Protocols”, “Leveraging Digital Technology to Enhance the Travel Experience”, “More Active, More Positive: Innovation and Opportunities for Tourism Industry Under the ‘New Normal’ and “Championing Global Cooperation and Entrepreneurship to Stimulate Market Vitality”. In the Asia Leadership Special Interview Series, the guests shared their unique points of view on “Sustainability, Heritage Preservation, and Rebuilding Tourism under the New Normal” and “Growth and Customer Experience Strategies to Meet the New Consumer Demand” as well as through China Daily Asia Leadership Roundtable Feature. Other sessions include Special Session: Solidarity to Reshape the Tourism Economy, Greater Bay Area Leadership Special Interview Series, among others. Via video conferencing, UNWTO and GTERC presented their seventh joint report, UNWTO/GTERC Asia Tourism Trends – 2020 Edition. The video “China Story: This is Hubei” showcased the exuberant culture, natural beauty and modern development of Hubei Province.

The 9th GTEF led discussions on key topics about tourism innovation and the power of transformation in response to the evolving global situation. The Forum also explored the shifts in tourism under the new normal of regular pandemic control and prevention worldwide, development of new products and services beyond constraints imposed by the macro-environment and operation, with the aim to strengthen vitality and resilience of the tourism economy.

About Global Tourism Economy Forum
The Global Tourism Economy Forum (GTEF) is hosted by the Secretariat for Economy and Finance of the Macao SAR Government, in collaboration with the World Tourism Organization (UNWTO), co-organized by the China Chamber of Tourism (TCC) under the authorization of All-China Federation of Industry and Commerce (ACFIC) and the Macao Government Tourism Office (MGTO), and coordinated by the Global Tourism Economy Research Centre (GTERC). GTEF’s supporting units include the Ministry of Culture and Tourism of the People’s Republic of China, All-China Federation of Industry and Commerce (ACFIC), the Liaison Office of the Central People’s Government in the Macao SAR, Office of the Commissioner of the Ministry of Foreign Affairs of the People’s Republic of China in the Macao SAR, World Travel and Tourism Council (WTTC), Pacific Asia Travel Association (PATA), World Tourism Cities Federation (WTCF), European Travel Commission (ETC), and the Macau Chinese Enterprise Association (MCEA).

Since its inception in 2012, GTEF has successfully established itself as an influential high-level cooperation platform to promote sustainable development in the global tourism industry with a focus on China. To date, GTEF had received more than 12,700 participants from 90 countries and regions, including delegations from 152 provinces and cities of Mainland China; and 600 internationally renowned speakers who are leaders in public, private, and academic fields. GTEF has continuously received consistent and wide amount of coverage from international press and media, valued up to USD $62 million.